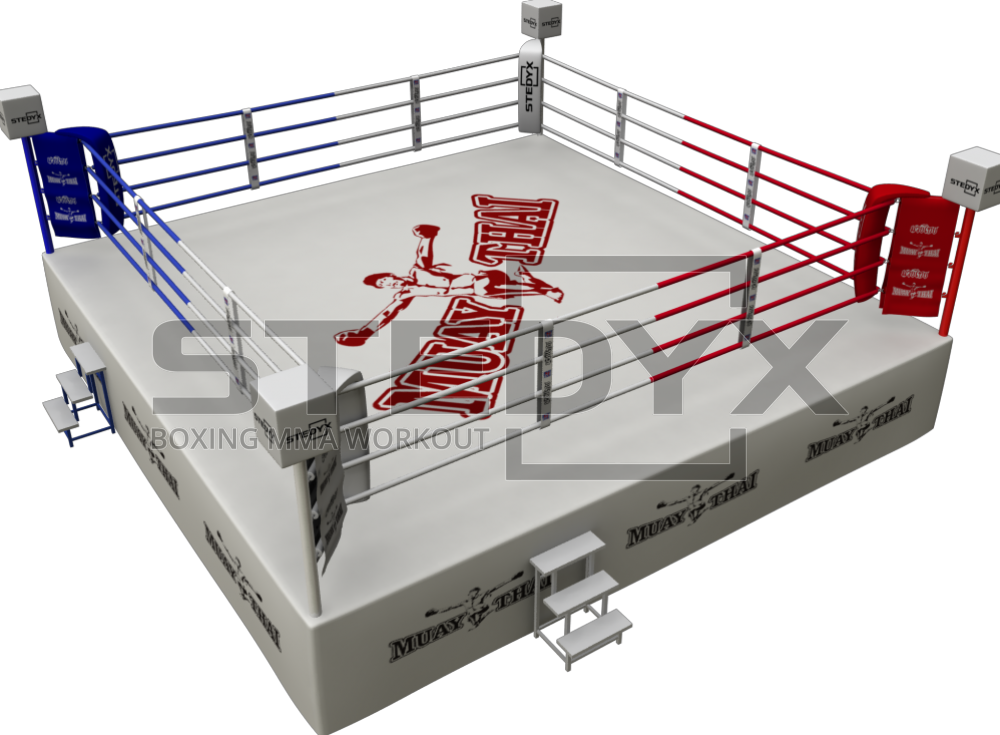 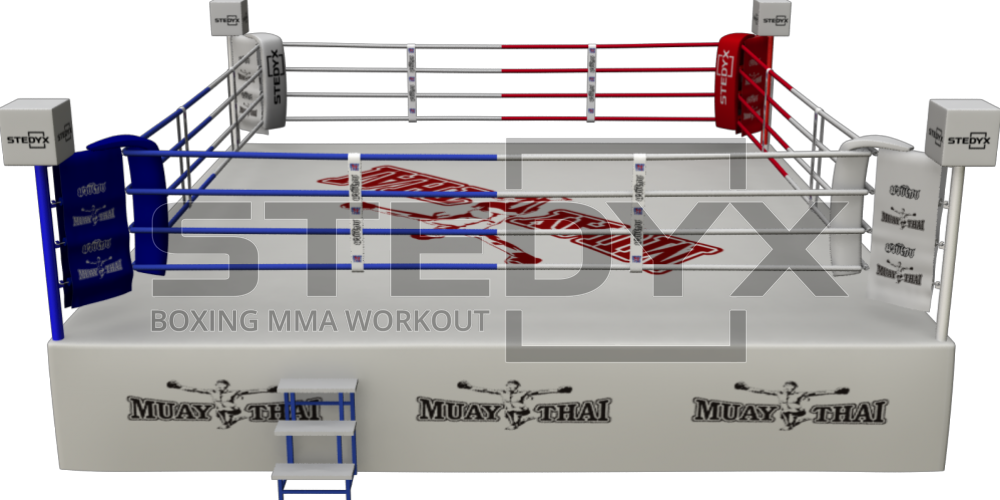 The best competition Muay Thai ring! Tradition, experience, strength, respect for opponents and the wai-kru. The Muay Thai competition boxing ring is designed for organizing local and international Muay Thai and K1 competitions.  It meets all the regulations of the federations WMC and IFMA. International parameters:
All parameters of the Muay Thai competition boxing rings are designed to meet the requirements for organizing international competitions.  The floor of the ring is well cushioned and covered with a cotton canvas, and it meets the most stringent requirements of the federations WMC and IFMA.  The surface of the frame is galvanically treated so as to provide exceptional durability and longevity.

Safety:
Thanks to its truss structure, the boxing ring is strong and stable. It meets the most demanding requirements.  The OSB boards that form the floor of the ring are 2.5 cm (0.98 inches) thick.  The elevated OSB floor has a padded layer of 2.5 cm (0.98 inches) and a cotton canvas. We normally supply this ring with 4 ropes. The safety of the athletes is our first priority. Top product in our boxing rings production.

Extra strong padded floors:
Muay Thai is a tough sport, and the fighters often fall on the floor.  Because safety is important to us, this ring is fitted with a 2.5 cm thick strong floor padding. You can configure the color combinations of the ring in the Design Studio or can contact us with any other requirements.

Boxing ring ropes:
The ropes and corners of the ring are designed to meet the latest safety requirements. They contain a core of steel wire that is placed in a safety cover in order to avoid cuts and possible injury.  The foam padding provides safety and comfort. The leatherette casing is easy to wash.

This Muay Thai ring is built according to world muay thai council http://www.wmcmuaythai.org/about-muaythai/muaythai-rules/the-ring

I want a different design:
We can produce the competition boxing ring with a conventional screw design or a folding design.  Because we are the manufacturer, we can offer this boxing ring in more color variants. You can choose color combinations of the ropes, a color combination of the ring frame and a different color of the ring canvas. You can easily configure everything in the the Design Studio. If you want logos of your partners or sponsors printed on your ring  - Contact us.

What else we can put your logo on:

Also we will produce custom:

Praying before the match

Muay Thai is referred to as “The Art of Eight Limbs”; and using eight points of contact the body mimics weapons of war. The hands become the sword and dagger; the shins and forearms were hardened in training to act as armor against blows, and the elbow to fell opponents like a heavy mace or hammer; the legs and knees became the axe and staff. The body operated as one unit. The knees and elbows constantly searching and testing for an opening while grappling and trying to spin an enemy to the ground for the kill.

The history of Muay Thai can also be traced to the middle of the 16th century. During the battles between the Burmese of the Konbaung Dynasty and Siam, the famous fighter Nai Khanomtom was captured in the year 1767. The Burmese knew of his expertise in hand-to-hand combat and gave him an opportunity to fight for his freedom. Soon after winning the match, he was freed by his captors and allowed to return to Siam. He was acknowledged as a hero, and his fighting style became known as Siamese-Style boxing, later to be known as Muay Thai. This fighting style was soon to be recognized as a national sport.

Muay boran, and therefore Muay Thai, was originally called by more generic names such as Toi muay or simply muay. As well as being a practical fighting technique for use in actual warfare, muay became a sport in which the opponents fought in front of spectators who went to watch for entertainment. These muay contests gradually became an integral part of local festivals and celebrations, especially those held at temples. Eventually, the previously bare-fisted fighters started wearing lengths of hemp rope around their hands and forearms. This type of match was called muay khat chueak (มวยคาดเชือก). Kickboxing was also a component of military training and gained prominence during the reign of King Naresuan in 1560 CE.

Muay Thai is referred to as the "Art of Eight Limbs" or the "Science of Eight Limbs", because it makes use of punches, kicks, elbows and knee strikes, thus using eight "points of contact", as opposed to "two points" (fists) in boxing and "four points" (hands and feet) used in other more regulated combat sports, such as kickboxing and savate. A practitioner of muay Thai is known as a nak muay. Western practitioners are sometimes called Nak Muay Farang, meaning "foreign boxer."

The ascension of King Chulalongkorn (Rama V) to the throne in 1868 ushered in a golden age not only for muay but for the whole country of Thailand. Muay progressed greatly during the reign of Rama V as a direct result of the king's personal interest in the sport. The country was at peace and muay functioned as a means of physical exercise, self-defense, attacking, recreation, and personal advancement.

Masters of the handcraft started education Muay in instruction bivouacs wherever scholars were presented with nourishment and cover. Trainees ought to be handled like one kin, and it was usual for scholars to take on the camp's designation like their personal last name. Scouts ought to be dispatched by the regal kin to arrange equals amid dissimilar bivouacs.

1913: British boxing introduced into the curriculum of the Suan Kulap College. The 1st descriptive use of the term “Muay Thai”

1919: British boxing and Muay taught as one sport in the curriculum of the Suan Kulap College. Judo also offered.

1921: 1st permanent ring in Siam at Suan Kulap College. Used for both Muay and British Boxing.

King Rama VII (r. 1925–35) pushed for codified rules for muay, and they were put into place. Thailand's first boxing ring was built in 1921 at Suan Kularp. Referees were introduced and rounds were now timed by kick. Fighters at the Lumpinee Kickboxing Stadiumbegan wearing modern gloves, as well as hard groin protectors, during training and in boxing matches against foreigners. Traditional rope-binding (Kaad Chuek) made the hands a hardened, dangerous striking tool. The use of knots in the rope over the knuckles made the strikes more abrasive and damaging for the opponent while protecting the hands of the fighter. This rope-binding was still used in fights between Thais but after the occurrence of a death in the ring, it was decided that fighters should wear gloves and cotton coverlets over the feet and ankles. It was also around this time that the term muay Thai became commonly used while the older form of the style came to be known as muay boran, which is now performed primarily as an exhibition art form.

In 1993, the International Federation of Muaythai Amateur, or IFMA was inaugurated. It became the governing body of amateur Muay Thai consisting of 128 member countries worldwide and is recognized by Olympic Council of Asia.

In 1995, World Muaythai Council, the oldest and largest professional sanctioning organizations of Muay Thai was set up by the Royal Thai Government and sanctioned by the Sports Authority of Thailand.

In 2006, Muay Thai was included in SportAccord with IFMA becoming the member federation governing international Muay Thai under the SportAccord umbrella. One of the requirements of SportAccord was that no sport can have a name of a country in its name, as a result, an amendment was made in the IFMA constitution to change the name of the sport from 'Muay Thai’ to ‘Muaythai’ – written in one word in accordance with Olympic requirements.

In 2014 Muay Thai was included in the International World Games Association (IWGA) and will be represented in the official programme of The World Games 2017 in Wrocław, Poland.

In January 2015, Muay Thai was granted the Patronage of the International University Sports Federation (FISU) and on March the 16th to the 23rd, 2015 the first University World Muaythai Cup will be held in Bangkok.

Today, there are thousands of gyms spread out across the globe. The clothing which competitors typically wear is bright and flamboyant. Recently such designs have become quite popular globally and companies such as Infightstyle Inc., from Canada, have contributed to the popularization of the style throughout the world. It is expected that this style will become more and more mainstream as a cult style much like surfwear did in the late 90s.

According to Thai folklore at the time of the fall of the ancient Siamese capital of Ayutthaya Kingdom in 1767, the invading Burmese troops rounded up thousands of Siamese and took them to Burma as prisoners. Among them were a large number of Thai boxers, who were taken to the city of Ava.

In 1774, in the Burmese city of Rangoon, the Burmese King Hsinbyushin (known in Thai as "King Mangra") decided to organize a seven-day, seven-night religious festival in honor of Buddha's relics. The festivities included many forms of entertainment, such as the costume plays called likay, comedies and farces, and sword-fighting matches. At one point, King Hsinbyushin wanted to see how Muay Boran would compare to the Lethwei (Burmese Boxing). Nai Khanomtom was selected to fight against the Burmese champion. The boxing ring was set up in front of the throne and Nai Khanomtom did a traditional Wai Kru pre-fight dance, to pay his respects to his teachers and ancestors, as well as the spectators, dancing around his opponent. This amazed and perplexed the Burmese people, who thought it was black magic. When the fight began, Nai Khanomtom charged out, using punches, kicks, elbows, and knees to pummel his opponent until he collapsed

However the Burmese referee said the Burmese champion was too distracted by the dance, and declared the knockout invalid. The King then asked if Nai Khanomtom would fight nine other Burmese champions to prove himself. He agreed and fought them all, one after the other with no rest periods in between. His last opponent was a great kickboxing teacher from Rakhine. Nai Khanomtom mangled him by his kicks and no one else dared to challenge him.

King Mangra was so impressed that he allegedly remarked, "Every part of the Siamese is blessed with venom. Even with his bare hands, he can fell nine or ten opponents. But his Lord was incompetent and lost the country to the enemy. If he had been any good, there was no way the City of Ayutthaya would ever have fallen."

King Mangra granted Nai Khanomtom freedom along with either riches or two beautiful Burmese wives. Nai Khanomtom chose the wives as he said that money was easier to find. He then departed with his wives for Siam. Other variations of this story had him also winning the release of his fellow Thai prisoners. His feat is celebrated every March 17 as Boxer's Day or National Muay Boran Day in his honor and that of muay boran's.

Today, some have wrongly attributed the legend of Nai Khanomtom to King Naresuan, who spent his youth as a royal hostage in Burma while Ayutthaya was a Burmese vassal. However, Nai Khanomtom and King Naresuan lived almost two centuries apart.

What our customers say?

I bought used  boxing ring from Mark because we needed one for organizing gala. I'm glad I traded with Mark just because the ring was in excellent condition.Still in good condition.

We delivered goods even to the Canary Islands together with Stedyx by the plane. . They have very well-developed system of export.

I know Stedyx company from past.  Marek always gave me good price and very good technical solution of my needs. I am happy to work with them.